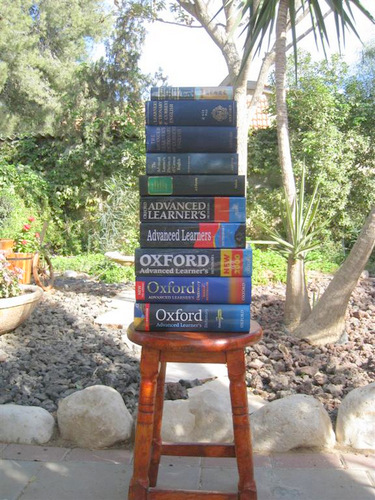 My collection of the Oxford Advanced Learner's Dictionary series

In the picture above are seen Dictionaries from the first to the eighth edition placed accordingly from top to bottom - the more advanced the edition, the more voluminous the tome.

In high school (boarding school) I studied at one of the best vocational schools in Israel - Bezeq College which was located in Jerusalem - between the years 1968-1973. The school - founded by Mr. Yekutiel Fekete, the legendary headmaster - awarded a matriculation certificate and a qualified telecommunications / electronics technician diploma.

As in any advanced technical school, like my college, English was a topic of great significance.

Our English teacher, Mrs. Dobkin, required us to use the Oxford Advanced Learner's English-English dictionary because it was the best of its kind and I think the situation has not changed to this day despite good competition published during the years including web-based dictionaries. My personal dictionary, I used in high school, is the fourth from top - the second edition. Mrs. Dobkin's decision was right because the advantage of using an English-English dictionary by an ESL student (first language Hebrew) was obvious since the student expanded his / her knowledge of English by the use of the dictionary despite that it was much easier and tempting to use an English-Hebrew-English one.

Recently was published the ninth edition (2015), but in the picture are shown only the first eight. The first edition came out in 1948.

The little book on top (Idiomatic and Syntactic Dictionary) is the precursor of the series. This first dictionary was written by the British linguist Albert Sydney Hornby (AS Hornby) (1898-1978), an English teacher at a small college in Japan, and was released in 1942 in Japan for learners of English as a second language (ESL). The Oxford University Press (OUP) was impressed by the small dictionary since it elaborated on spelling, grammar, pronunciation and language usage much more than any other dictionary at that time and decided to base on it its well-known line of dictionaries.

Second and third books from top, in the picture, consist of the two versions of the first edition during which the name of the dictionary was switched to the present one (the former was "A Learner's Dictionary of Current English").

Hornby was the actual editor till the third edition that was published in 1974 but still all later editions indicated him as editor in chief out of honor and respect for the man or some formal considerations.

Whenever I opened one of his dictionaries and his name popped up in front of my eyes I wondered who was "AS Hornby"? Hornby for me is no less than a legend since I grew up on his dictionaries that have been the central pillar of my long love affair with the English language and also because of his great contribution to English language learning around the world as a worker of the British Council.

Since high school I make sure to buy a hardcover edition whenever a new one hits the market and I have to admit that it is like a holiday for me. I also bought earlier editions and as a matter of fact I have all of them in my collection, from the beginning, as evidenced by the picture at the top of this page. Even though I have dozens of different dictionaries, this is my favourite one.

The above image was shot for the presentation of a science fair project idea, aimed at middle and high school math / statistics students and teachers, using dictionaries in order to evaluate: the number of headwords in a dictionary; estimation of the size of one's vocabulary; and the growth of the English language vocabulary over the years.

The project could be seen at the following link:
Dictionary Vocabulary Statistics


How I learned English

In high school, I had trouble with my English, and this lasted to the senior year when our English teacher, Mrs. Dobkin, sent us to private tutors according to her recommendation.

I was sent to a tough lady (unfortunately I do not remember her name) and by reason of the lack of time remaining until the matriculation exams, I attended her lessons daily, five times per week.

In her lessons my tutor elaborated on the issues being taught in the classroom and I ended up with an enormous amount of homework. But the "worst" thing was that I was asked, at least twice a week, to study by heart three pages of English prose.

I spent most of my time studying English and I neglected altogether other subjects out of consideration that I would handle them somehow. My day ended long after midnight. My efforts were noteworthy since the turbulent period of adolescence was constantly looming in the background.

My tutor was never satisfied – who on earth could meet all her assignments. She used to scold me saying that I should be ashamed of myself because I was wasting my parents' money.

Only later I realized that it indeed cost my parents a lot of money if we were taking in account that my father was a textile worker. I am really grateful to them for that.

What caught my attention was the fact that my tutor used the comprehensive multi-volume Oxford English Dictionary (OED) - which gave me the drive to use my own Advanced Learner's Dictionary.

I greatly improved my English skills to Mrs. Dobkin's delight, especially with writing essays – learning by heart entire prose pages has left its mark. I passed the matriculation exam in English scoring 70 - nobody was happier than me. And that was more or less the average of my matriculation exams in general due to my heavy investment in English and neglecting other subjects.

When I joined the Israeli army l had much free time at my disposal and I had not any hesitations about the best way to use it to my advantage. In high school I had already realized the great importance of the English language - all advanced electronics books were written in English and James Bond, the Beatles and the "Famous five" did their respective jobs in Shakespeare's language. I was not willing to be embarrassed again in the future by my English - the most prominent language in the world - because it was clear that it could have some adverse effects on life in general and on higher education prospects in particular.

I started to read graded readers and much to my surprise I was able to begin with stage 5 (out of 7) because I was sure that I had totally forgotten my high school English. The first book I read was David Copperfield by Charles Dickens, published by Longman. I stayed with each stage a number of books till I felt comfortable enough to move on.

After a year I finished my graded reading and began with ordinary English books that I borrowed from our local library.

I spent many hours reading and sometimes more than ten hours a day.

Needless to say, the dictionary I used all this period was Hornby's Advanced Learner's Dictionary.

About grammar books: it must be remembered that Hornby's dictionaries contain much useful information about English grammar and structure, but at first I also used my high school basic grammar books that were in Hebrew and were satisfactory at that time. Only after a few years, when my English skills greatly improved, I would have seen the point of buying more advanced grammar books earmarked essentially for learners of English as a first language.

Luckily came my way a guy named Michael Kislov, a new immigrant from Ukraine and a polymath. He worked as a lifeguard at our local swimming pool. We made friends and soon I realized that he worked in Ukraine as a Russian-English translator and possessed spoken English at mother tongue level. I jumped at the chance and we talked hours English - I improved the ability to speak, which until then had been almost not in existence, and he maintained his English skills. I owe him a lot and till today we are good friends because of the English language mutual experience.

I enjoyed success later when I enrolled for the Open University of Israel and passed easily the English exemption examination.

Thirty years later I wrote a juvenile novel in English (The Orchid Grower) and the late Mrs. Dobkin would have been very proud of me.

Today, I have my own online Adsense business, in English, about science fair projects. My investment in the learning of the English language has paid off in every respect and in fact my study of this language has not stopped for a moment and continues uninterrupted till this day as a way of life.

Today the Advanced Learner's is my faithful companion since the application is installed on my smartphone and whenever I need his advice he is ready.

To sum it up: there are good news and bad news when it comes to a second-language acquisition. The good news: you do not need any special mental abilities - as evidenced, any child easily learns his mother tongue and this is even true for most of the retarded children because language acquisition is an innate ability; and the bad news: for those who do not live in an English-speaking environment, there is a need of a great deal of extensive determination, hard work and stamina. The more the learner reads, writes and speaks the better their linguistic performance, including a deeper understanding of English grammar.

Hence, it is clear that in the process of language acquisition success depends more on the student than on the teacher that may focus more on motivating and less on language basics - as opposed with math learning, for example, where is required a massive teacher intervention in the process of the acquirement of mathematical reasoning and cognition skills by the student.


Comments and inquiries could be addressed to:
Rubin.Tzvi@Gmail.com